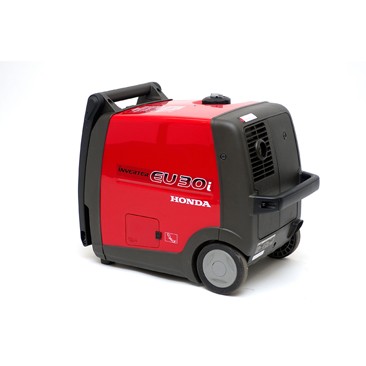 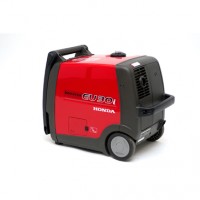 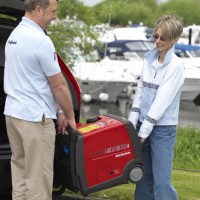 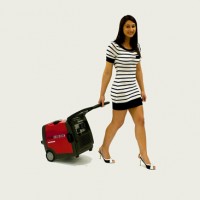 A HANDY SOURCE OF POWER

The EU30iu Handy is the lightest and most portable 3000 watt generator Honda's ever made. It features built-in wheels, fixed handles and a folding handle to allow for easy movement of the generator.

It also features a microcomputer-controlled sinewave inverter that guarantees commercial-quality electricity – making it ideal for use with frequency-sensitive electrical equipment such as laptops.

And the EU30iu Handy also uses a high-speed multi-point alternator that is integrated into the engine itself. This technology reduces the overall weight and size by 25% to 50% compared to similarly classed conventional models, making it easy to move around.

The EU30iu Handy features an Eco-throttle, which adjusts the engine speed to meet the load demand. This increases fuel economy whilst also reducing noise as the engine is not required to run at full capacity unnecessarily.

The generator is Parallel Connection capable. This feature allows two EU30iu Handy generators to be quickly and easily linked using a special parallel connection cable to double your output to 6Kva.

With a low operating noise level and enough power to be used in a wide range of home, recreational and professional uses, the EU30iu Handy incorporates all of Honda’s portable power technology.

It might seem fairly obvious, but one element of the Handy that sets it apart from the rest is its sturdy fold-down carry handle and large-diameter wheels.

You'll get up to 7.7* hours of continuous operation on a full fuel tank, it's lightweight (35kg) and last, but not least, the EU30iu Handy is environmentally friendly with low emissions, less noise and low fuel consumption.

*With eco-throttle switched on at 1/4 output

A 4-Year Domestic Warranty and 1-Year Commercial Warranty ensure that no matter how hard you work your EU30 Handy, Honda's got you covered.

Throw in a 450+ strong network of authorised Honda dealers around Australia, and no matter where you're using your generator, there'll be someone nearby to keep you on the go.

Honda's four-stroke engines eliminate the need to mix fuel and oil, which saves time and money. They also provide superior fuel efficiency and emit significantly less carbon and noise than most of their two-stroke counterparts

Runs on unleaded fuel so you’ll never have to mix oil and petrol again, and the engine is protected via a low oil alerty system.